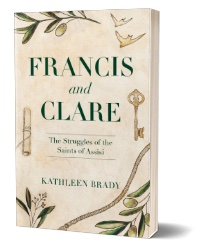 Kathleen Brady's newest biography is Francis and Clare The Struggles of the Saints of Assisi to be published November 16, 2021. She was named a Fellow of the Society of American Historians for her biography Ida Tarbell: Portrait of a Muckraker. Her critically well-received Lucille, The Life of Lucille Ball is currently in its fifth printing.

Brady is featured in many programs about her subjects. On Ida Tarbell these include podcasts on NPR's Money Matters series on monopoly and anti-trust and on the History Channel. On Lucille Ball, these are TCM's podcasts and the Fox Nation documentary, as well as the American Masters PBS special. She narrated the first installment of the 1993 PBS series "The Prize."

The 1994 ABC-TV movie, "A Passion for Justice," starring Jane Seymour, was based on Brady's research into the life of Mississippi journalist and civil rights activist Hazel Brannon Smith. Brady is a past co-director of the Biography Seminar at New York University and a former reporter for Time Magazine. She has contributed columns to Newsday and other publications.